Adlai E. Stevenson II was well known for his eloquence, wit, and ability to express the hopes and aspirations of the people whom he served.

From the beginning of his political career through his final years as Ambassador to the UN, Adlai's speeches, debates, interviews, and writings offered abundant examples of his wry humor, grace, common sense, and profound wisdom.

Adlai's core values of Think, Care, and Connect are evident in his words and actions. The following collection of quotes provides a sampling of how Adlai expressed these foundational beliefs.

While many perceived him as an intellectual — even taunted as an "egghead" — Adlai was quick with a humorous retort, self-deprecating quip, and insightful analogy, as evidenced in the following collection of witticisms. 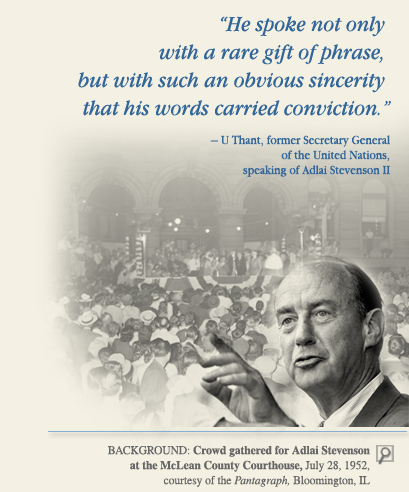