Adlai Stevenson II knew that people cannot live in isolation, that people across the globe are mutually dependent on one another. He valued CONNECTING with others.

He believed that Americans should pay attention to the needs of people in our own country as well as those in faraway lands. He dedicated himself to a life of public service in response to those needs.

Stevenson felt that the United Sates must neither separate itself nor impose its values on the rest of the world. Rather, the U.S. should serve as a model of a just and compassionate nation. 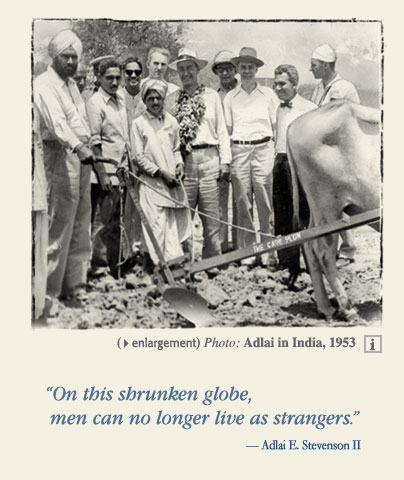 Appointed U.S. Ambassador to the United Nations in 1961, Adlai became a recognized world leader and a strong advocate for making global connections. As a journalist and statesman, Adali made lengthy trips around the world, visiting Vietnam, India, Japan, and the Middle East.
Photo: Stevenson in India, 1952.
Abraham Lincoln Presidential Library