Jokingly referred to as an "egghead," he embodied the belief that problems can be solved if approached creatively and intelligently. He respected others' opinions and welcomed the benefits that come from a serious and honest debate of complex issues. Adlai recognized that we are all capable of understanding difficult issues and that quick and easy solutions to social problems won't work. 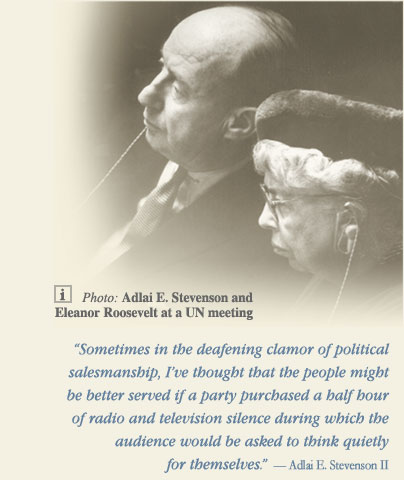 Eleanor Roosevelt was a recognized "voice of conscience" for the American people during her husband Franklin's presidency and for years afterwards. She and Adlai Stevenson II shared similar concerns: Both were particularly aware of the developing world and building global structures for peaceful dialogue as an alternative to war.